For someone that was not exactly thrilled about their birthday, I sure did ‘clean up’ nice! Eric has gone out of his way to spoil me all this month. From making dinners to little things like letting me pick out the movie to watch : ) he has made sure I embraced my birthday.

When I mentioned I wanted to get Pioneer Woman’s new cookbook, so that I could be a crazed fan and go to her book signing, what did Eric do… surprise me with the book.

For my birthday he had planed all month to get the perfect gift:

Yes, that’s a Kitchen Aid Mixer Professional! I was so shocked and excited when I saw it! I have been wanting a Kitchen Aid Mixer for quite sometime! Eric immediately started asking me what I was going to make with it. He then pulled out another gift:

Then today I was catching up on my blog reading and I saw on the food blog Taste and Tell that I had won a contest that Deborah (the author of Taste and Tell) was having for Emeril’s new cookbook Emeril 20-40-60! When she made the announcement on her blog as picking me as the winner she even gave a shout out that it was my birthday! Thanks Deborah!

And thanks to all my friends, family and fellow bloggers/readers who wished me a Happy Birthday, it was perfect! Oh, and don’t worry, these items (my new toys and books) will be making a more in depth appearance in the upcoming months (look for recipes soon)!

OK, enough about me lets talk food! Since Thanksgiving is a week away I decided that I would post a recipe each day this week that might help you on T-day! Nothin’ too fancy maybe just some smashed taters, or an apple pie, or some cute Turkey cookies. I hope (remember I said hope not I promise) to post a different Thanksgiving themed or related recipe every day leading up to the big day, so gobble them up.

The first recipe(s) I chose to feature are mashed potato recipes. I have only been writing this blog since March and have already posted three mashed potato recipes. One is my all time favorite mashed potato recipe (but of course I have to say that because they are Eric’s world famous mashed potatoes), another is my own recipe for ‘loaded’ mashed potatoes (I am also partial to this recipe too!) with cream cheese, bacon, sour cream, and herbs, and the last one is from Rachael Ray. All are easy, taste great, and would be perfect soaking up some homemade (or store bought, whatever floats your gravy boat, hehe) gravy! 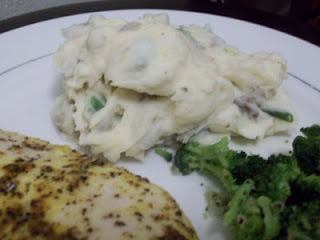 No pic of Rachael Ray’s mashed potatoes but you can fin the recipe here.

« Not Just Any Wings (Ok I Know Not Very Creative Title, But Hey I Can’t Be Creative All The Time)
Spice Up Your Pumpkin »

Hi Y'all, welcome to Kitchen Concoctions!

I'm Heather and I have spent most of my life concocting recipes inspired by the rich southern flavors and Texas grown ingredients I grew up with.

Today, I'm on a mission to help people gain confidence in the kitchen and inspire others to cook, craft and create life long memories with friends and family around the dinner table!