Well it is the last day of the month, again. Like I said a few days ago, the month just flew by! And it doesn’t help that February is a short month anyways. Since it is the end of the month it is time to wrap up another cookbook.

This month I featured Emeril 20-40-60: Fresh Food Fast. I have featured an Emeril cookbook before (Emeril At The Grill) and was impressed with that book but I must say that I like this one even more.

While most of the recipes have basic and readily available ingredients, I did have one recipe that stumped me and I had to substitute a different ingredient for the one I couldn’t find. Also some of the recipes actually took a shorter amount of time to prepare than what the time had listed and one did take longer to make. I totally would rather them take a shorter amount of time to make so that I can eat my yummy dinner sooner.

I would 100% recommend this book. There are so many other recipes that I want to try making from it and with it’s track record I know those recipes will turn out delicious too! A couple of the recipes I have seen in a few of Emeril’s other cookbooks and on his website, but the majority of them are new. Who doesn’t love a well put together, well rounded, cookbook with recipes you know everyone will love. 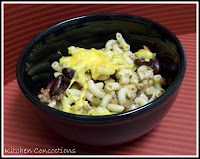 The first recipe I made was this Chili Mac. It was good and made a TON. I mean you could literally feed an army off the amount of food this recipe makes. I was slightly disappointed with it though, because I was hoping for a chili mac that was a little bit more ‘saucy’ and ‘cheesey’. However, this didn’t keep Eric and I (and Eric’s brother helped too) from eating the ENTIRE pan in the course of two days. Good thing I had these two guys on hand with big appetites to help devoir this.

Next I made this Stir-Fried Chicken and Aromatic Jasmine Rice. This was actually two separate recipes that I combined for one AMAZING dish. Eric and I gobbled this up and the only disappointment that we had was that there was NOT enough leftovers (that’s always a good problem to have). I am totally making this again this week for dinner (not even 3 weeks from the last time I made it) and I am for sure going to double the recipe. This was my absolute FAVORITE recipe (so far) from this cookbook.

Another recipe that Eric has already asked me to make again was the Cornmeal Crusted Tilapia. If you remember this was the recipe that gave me a little trouble. I looked high and low for that blue cornmeal and could not find it anywhere. Next time I will have to look at an organic/specialty grocery store. But despite not having blue corn meal, this dish was so easy to make and tasted great.

These Boursin Stuffed Chicken Breasts were a nice way to change up the same ole’ same ole’ chicken breast that we all serve every other Sunday. This chicken had flavors and ingredients that complemented each other well. It was a nice treat to have a ‘fanicer’ chicken breast dinner. ; ) This was the one recipe, however, that said it was only supposed to take 40 minutes and it really took me over an hour! : (

And last, but certainly not least, this chicken and rice soup was the second place runner up for the “FAVORITE recipe from this cookbook” award. With simple ingredients that are pantry staples for most; this soup came together quick and had wonderful flavor. I love having great soup recipes on hand during these chilly months. And ones that come together fast, make a lot, and use ingredients I already have on had; not to mention taste wonderful, means this is a recipe to use again and again.

« Freebie For You
March Makes A Mark »

This site uses Akismet to reduce spam. Learn how your comment data is processed.

Hi Y'all, welcome to Kitchen Concoctions!

I'm Heather and I have spent most of my life concocting recipes inspired by rich southern flavors and Texas grown ingredients.

Today, I'm on a mission to help people gain confidence in the kitchen and inspire others to cook, craft and create life long memories with friends and family around the dinner table!